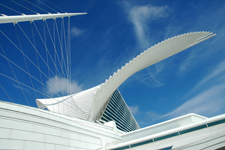 The Milwaukee Art Museum and the Tower Site will be the backdrops for the next installment of Transformers, announced Visit Milwaukee.

The majority of the shots will be filmed at the Milwaukee Art Museum. Filming will begin the week of July 12 at the art museum. A cast and crew of 150 personnel will be helping create the shots.

Both men and women are asked to dress up in a “trendy-executive” style of clothing. The casted extras will work on July 12 and July 13.

It is estimated that Milwaukee will receive more than $1 million in local spending on salaries, hotels, food, fuel and more.

“Public Enemies” was the most recently shot major Hollywood film in Milwaukee in 2008.