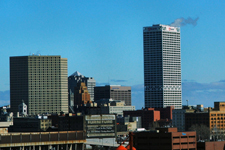 Milwaukee, Waukesha and West Allis Wisconsin were ranked number 10 in the Most Improved U.S. Housing Markets for 2010, according to Bloomberg Businessweek.

A positive trend has been occurring in the housing market since 2009. A great amount of closings can be credited to the Home-Buyer Tax Credit in early 2010.

Metro MLS statistics show that home sales have increased in May by 14.7% in Milwaukee County and 44.2% in Waukesha County compared with May 2009.

The ranking was based on the following stats: